Soil holds more carbon than plants and the atmosphere combined and much of the soil carbon is held in a stable form. That’s good news from a climate change perspective. 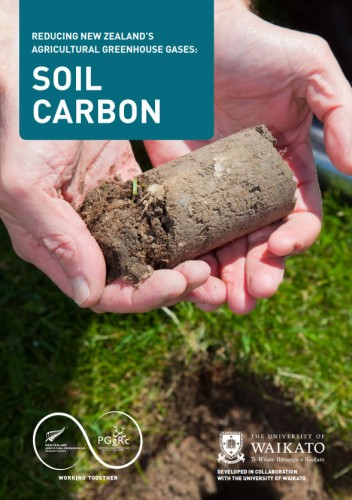 Internationally, New Zealand has made a commitment to lower its greenhouse gas emissions to agreed targets and scientists are working on the “how”.

As an agricultural nation, if New Zealand can increase the amount of carbon stored in its soils, the country could offset other types of greenhouse gas emissions. Research aims to identify which farming practices increase soil carbon and which decrease it.

However, some carbon chemically binds to soil particles and is inaccessible to microbes. In this form, it is stable and can remain locked away for decades.

Pasture versus cropping
Permanent pasture is a relatively stable store for soil carbon, while arable practices tend to see soil carbon reserves decrease over time. Because New Zealand agriculture is dominated by permanent pasture, the country’s soils have relatively high carbon content, which is a positive.

How can farmers promote soil carbon?
Unfortunately, there are no robust guidelines yet about how soil carbon can be increased in New Zealand pasture-based soils. However, because soils can lose carbon quickly – compared to their ability to recover it – the priority is to protect carbon stocks. This is done by simply maintaining pasture or plant cover.