WATCH OUT, METHANE – INHIBITORS ARE COMING

One of the most promising tools in the strategy to reduce New Zealand’s greenhouse gas emissions from agriculture is making steady progress towards commercialisation. 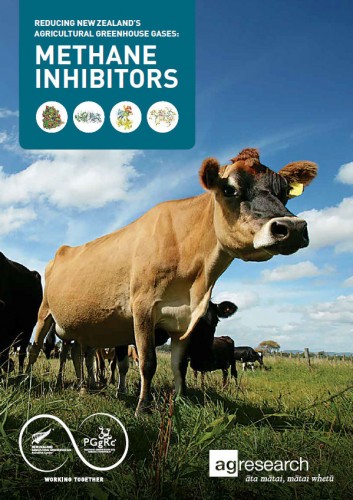 Internationally, New Zealand has made a commitment to lower its greenhouse gas emissions to agreed targets. The two problem gases for New Zealand are methane and nitrous oxide.

Methane inhibitors have the potential to reduce methane production by around 30 per cent, so their widespread adoption by farmers would make a significant dent in reaching the country’s reduction targets. However, with New Zealand livestock eating grass 90 per cent of the time, there are challenges to realising this potential, including how the inhibitor would be given to animals and ensuring the economics stack up.

How is methane produced?

The rumen is essentially a fermentation vat. It contains microbes that play a role in fermentation. One of those microbes is methanogen. However, methanogens are not essential to the animal – in fact, they are opportunists. They use hydrogen gas, a by-product of fermentation, and combine it with carbon dioxide to produce methane and water. The methane is then released into the atmosphere when the animal belches.

How does a methane inhibitor work?

Scientists have identified chemical compounds that simply stop the methanogens from working, shutting down the process of methane production.

A Swiss company has developed an inhibitor that works in a feedlot system, where it can be mixed with feed and consumed continuously. However, this isn’t practical in New Zealand’s pasture-based system. A practical delivery mechanism is therefore one of the challenges. Options, such as bolus capsules, are being investigated.

How long until farmers can buy inhibitors?

Conversations with potential commercial partners are underway. However, testing to rule out any impact on animals’ health, welfare and productivity needs to be carried out, as well as ensuring there are no residue or food safety concerns.

All going to plan, commercial release is expected sometime after 2023. Significantly, the technology should be applicable internationally.